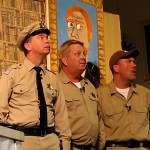 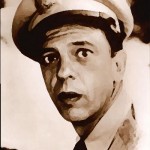 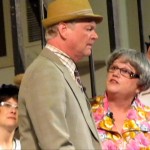 to benefit the Diocese of Mississippi’s Honduras Medical Mission!

You do not want to miss this wonderful evening! 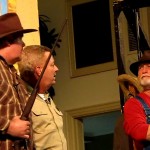 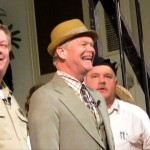 Mayberry Ministries is a troupe of volunteer actors from the Jackson area who perform skits made famous by Andy Griffith and Don Knotts on the “Andy Griffith Show”.  100% of the proceeds go to fund the 2014-2015 Honduras Medical Mission.  The Episcopal Diocese of Mississippi Honduras Medical Mission provides health care, veterinarian care, and pastoral care for the poorest of the poor of Honduras. It is the prayer of those who plan, support and participate in the mission that their labors glorify God. See below for a complete history of the Medical Mission.

We are offering two performances, Saturday, April 28th, both performances being held in the nave of St. John’s.

The evening performance will begin with dinner at 5:30, served in the parish hall, followed by a 6:30 performance; tickets for the dinner & show are $50 each.

Contact the parish office 601.428.7252 to purchase tickets, or you may do so by using our PayPal interface below.

The Honduras Medical Mission originated in 1982 with a men’s Sunday School class at St. John’s Pascagoula. Key members of that first class included Dr. Bob Donald and Gene Asbury. After an aborted attempt to carry out a mission in Guatemala, the mission shifted its focus to northern Honduras. San Joaquin in Santa Barbara Department was first visited on the second mission in 1983. San Joaquin and the surrounding villages have been the focus of the mission until 2007. At that time, the current Bishop of Honduras, Bishop Lloyd Allen, asked the team to move to another area of Honduras that is in need, the city of Omoa and its surrounding area.

The pattern of a single parish serving as the sponsoring parish for two years and then passing on the responsibility was established and continues to this day.

To relieve the individual sponsoring parishes from the burden of recruiting team members and to create a body to oversee the operation of the medical mission, Bishop Gray Jr. formed the Honduras Medical Mission Committee of the Diocese of Mississippi. Chairs of this committee have included Ed Nicholson, Chip Leggett, Ed Sisson, Larry Killebrew and Hilton O’Neal.

Each year the team physician’s see approximately 2,900 to 3,500 patients in the five day clinic. Everyone who comes to the medical clinic is given free medicine and most are treated for intestinal parasites. The dentists pull about 750 to 1,000 teeth. The vets see hundreds of horses, cows, pigs, dogs and cats. These activities and numbers have been relatively constant since at least 1985.

In response to increased applications from potential team members and to the withdrawal of Trinity, New Orleans; the Mississippi Honduras Medical Mission extended its service to a satellite clinic in Conception Del Norte in 1998. Physicians there have seen between 1,500 and 1,750 additional patients. Each person cared for was also given free medicine and treatment for intestinal parasites. In 1998, a vet spent two days in Conception and the following year, became a full time part of the team. In 2000, dentists made their first visit to Conception and pulled approximately 1,000 teeth. The last year for the team to visit Conception was 2006, with Kathy Kvam holding a two day vet clinic there in 2007.

In 1998, an optometrist, William Strickland was added to the team in San Joaquin. That same year, the team purchased equipment and began to seal the molars and premolars of children in an effort to prevent tooth decay. In 1999 children’s vitamins with fluoride were added to the medicine list. These were distributed to all the children.

For the last ten years, the medical mission has sponsored Kinder Mississippi, a preschool Christian education and feeding program for San Joaquin. In 1998-1999, the feeding program was extended to all school age children. Previously, the mission had sponsored a full-time social worker in the community. This individual worked with the local population, promoting hygiene and better nutrition. The Diocesan ECW sponsored a garden for the local women. For the last several years , the medical mission has paid for the transportation, uniforms and school supplies of the children from San Joaquin who want to continue their studies in San Antonio, a nearby town with a public middle school.

The Honduras Medical Mission has worked with the Diocese of Honduras and the local church and political administration in San Joaquin on a number of building projects. These include a clinic, dormitory, kitchen, dining hall, kindergarten, social center, and repairs and additions to the church. The mission has also helped pay for two new water storage tanks and a distribution system for potable water and for the bringing of electricity to the village.

Several medical teams from other dioceses have trained with the Mississippi team prior to undertaking their own mission.

The Honduras Medical Mission would not be possible without the assistance of the office of the Bishop of Honduras. Their advice and logistic support have been critical to the success of the Mission. In addition, the Mission has been a joint effort of the volunteers of Mississippi and the people of the three villages where the clinics have been held. Without the assistance of these locals, the Mississippi members of the team could not serve the number of patients seen each year. In recent years, the Mission has come to depend on the translation services of high school students from St. John’s School in Peurto Cortes and from the Buen Pastor School in San Pedro Sula. The Mission is truly a combined Mississippi and Honduras effort.

The team members pay their own expenses, but the mission is dependent on financial contributions from individuals, parishes and other institutions for the purchase of medicines, equipment and for the various building and feeding projects. Donations decreased following the aftermath of Katrina, putting the Medical Mission in jeopardy. The Diocesan Committee chose to move forward in faith and with a grant from the Trustees of the Epsicopal Diocese of Mississippi, were able to plan a new mission in Omao in 2008 at the request of Bishop Lloyd Allen, Bishop of the Episcopal Church of Honduras.

Although the mission in Omoa was a success, the team did not feel that they were serving the poorest of the poor as we had done in the mountains of the Province of Santa Barbara. Through Bishop Duncan Gray III, a request was sent to Bishop Allen to allow us to return to San Joaquin. This request was granted and in 2009 the mission travelled back to our old friends in San Joaquin. Along with a committee in Honduras, we will look at ways of helping the people of San Joaquin develop their community and region in ways that are sustainable, and that create independence, with the understanding that our primary focus is to be that of a medical mission.